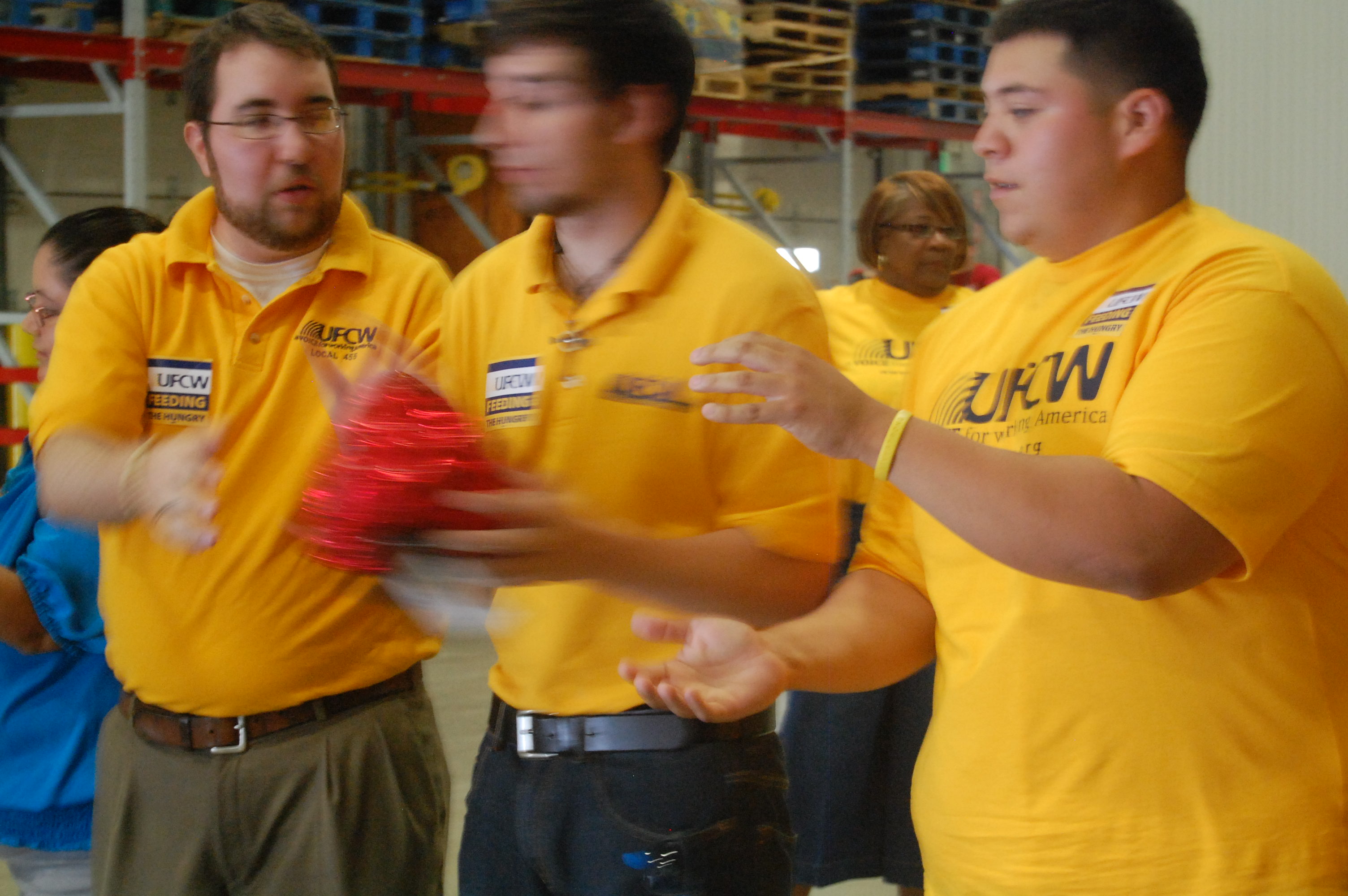 We’re the United Food and Commercial Workers International (UFCW), a proud union family of 1.3 million hard-working men and women working together to provide a better life for our families and yours.

Our union family is building worker and community leaders that will meet the needs and aspirations of working families. We want to strengthen our communities to achieve economic, racial and social justice.

Our members know that no one should struggle alone. It only takes one conversation to create lasting change that grows power for working people. Join us and amplify the voices of our membership.

People who are a part of UFCW have joined together to take back control of their lives. We are committed to creating a diverse, inclusive democracy for our communities and workplaces.

(Orlando, Florida) – After just one week on the job, Wal-Mart cashier Cherie Beck was terminated when she complained on behalf of herself and her co-workers to her supervisor about constantly changing schedules that made managing her life nearly impossible. Beck was then fired for what the company called “”hostile behavior.”” Beck was singled out once she voiced her concerns about workplace conditions. The National Labor Relations Act protects the right of workers like Beck to engage in that type of behavior, called “”concerted activity.””

In an unusual move, Wal-Mart settled the case, brought by the United Food and Commercial Workers Union on behalf of Beck. Beck has received back pay plus interest, totaling nearly $7,000. The decision to settle came as a surprise, as Wal-Mart historically has resisted settlements.

“”Wal-Mart knows what it did was wrong, and that is what they are paying for,”” says UFCW Executive Vice President Mike Leonard. “”Beck’s back pay is important because every lawyer who has battled against Wal-Mart knows that it hates to settle.””

In addition to paying Beck for lost wages, Wal-Mart is required to post a notice of the settlement in the East Colonial Drive store where Beck worked. The notice clearly states that Wal-Mart will not threaten associates, deny the right to organize, or engage in surveillance of workers, among other things. The notice is a major step in the efforts to inform Wal-Mart workers of their legal rights at work, and marks the second time that Wal-Mart has been directed to post such a notice in this store.

“”For years, Wal-Mart has tried to keep workers from knowing what their rights really are. Now, workers are finally getting the opportunity to find out what they can do at work,”” says Leonard.

Wal-Mart has also recently settled in another case in Villa Rica, Ga., in which the UFCW charged that Wal-Mart: threatened employees for union activity, spied on them, denied workers the right to solicit for the union on their own time, denied a co-worker witness at a disciplinary meeting, and disciplined a worker for asking for a witness. The company has agreed to display a notice in the Villa Rica Wal-Mart similar to that posted in the Orlando store. Specifically, this notice outlines federal laws protecting workers’ right to organize, as well as a statement that Wal-Mart will not discipline workers for exercising their rights.

A recent complaint issued by the National Labor Relations Board on behalf of Dana Maillioux, a Wal-Mart worker in Ft. Myers, Fla., also cites unlawful termination for “”concerted activity.”” While Wal-Mart has claimed to refrain from such tactics in stores where charges have been filed, the company continues to fire workers who discuss workplace conditions with their co-workers.

The United Food and Commercial Workers International Union (UFCW) is North America’s largest organization of retail workers. With 1.4 million members in local stores and supermarkets across the United States, the UFCW is America’s Neighborhood Union. The UFCW remains committed to helping Wal-Mart workers have a voice on the job.

More than 5,000 delegates, alternates and guests to the United Food and Commercial Workers International Union’s (UFCW) Fifth Regular Convention will gather in San Francisco, California, July 28—August 1, 2003, to set a working family agenda for 2003 and beyond.

UFCW delegates, representing the United States and Canada, will address some of the most urgent economic and social issues including:

· Organizing initiatives to give workers a free choice for a voice at work;

· Labor-management conflict on health benefits and pension programs; and

The general sessions of the UFCW are open to credentialed members of the press.

Workers with No Insurance, Workers Bargaining To Keep Coverage

Over 3,000 working families a day lose health insurance coverage. Over 41 million Americans are uninsured. Health care costs are rising faster than inflation. At the nation’s largest private employer – Wal- Mart – more than 60 percent— or, about 600,000 workers – do not have company-sponsored health insurance. More corporations are dropping health benefits for employees and their families. More American workers are opting out of insurance as companies shift more of the cost to employees.

The 1.4 million-member United Food and Commercial Workers Union (UFCW) – America’s neighborhood union – represents grocery store clerks, food processors and health care workers – all growing sources of employment. The majority of UFCW members now have employer-paid health insurance – but, the health care cost crisis, along with competition from employers who do not provide insurance, threatens to destroy the employment-based health care system. Some of the largest strikes in the past 10 years—28,000 workers in New Jersey and 35,000 workers in Northern California – have been UFCW strikes over health care coverage. Demographically, the UFCW is a microcosm of voting, middle- income America with about 52 percent women, about 11 percent African-American and about 10 percent Latino.

The forum will take place on an open stage with a roving Bill Press, of MSNBC’s “”Buchanan and Press,”” posing questions from workers in the audience to the candidates seated in director’s chairs on stage. The backdrop will be a convention hall filled with 5,000 workers meeting to set an agenda for their union.

Democratic Party presidential candidates will appear in a forum on health care issues at the Convention of the United Food and Commercial Workers International Union:

The forum will take place on an open stage with a roving chairman, Bill Press, of MSNBC’s “”Buchanan and Press,”” posing questions from workers in the audience to the candidates seated in director’s chairs on stage. The backdrop will be a convention hall filled with 5,000 rank and file delegates.

12:00 p.m. Pre-Forum Press briefing (Room 202 in Moscone Center) on health care issues featuring “”Behind The Numbers in The Health Care Crisis”” Among those participating will be a Wal-Mart worker without insurance, workers currently on strike for affordable health care, and health care workers.

4-5 p.m. Post-forum press availability at the discretion of the candidates in Room 202.

Please arrive no later than 2:00 p.m. to pick up credentials in Press Room on Mezzanine. TV cameras will NOT be permitted in the convention hall. A mult box will be available to pull video and audio feed from UFCW cameras.

The 1.4 million-member United Food and Commercial Workers Union (UFCW) represents grocery store clerks, food processors and health care workers. The majority of UFCW members now have employer-paid health insurance – but the health care cost crisis, along with competition from employers who do not provide insurance threatens to destroy the employment-based health care system.