On Jan. 21, members of the UFCW Women’s Network, along with women and men from UFCW locals across the country and Canada, took to the streets in the nation’s capital and many other cities large and small to stand united and show dedication to protecting our rights and the rights of our fellow citizens, regardless of gender, race, ethnicity, religion, and sexual orientation and identity.

Click the photo below for a slideshow of just a few of the many photos of UFCW members in action: 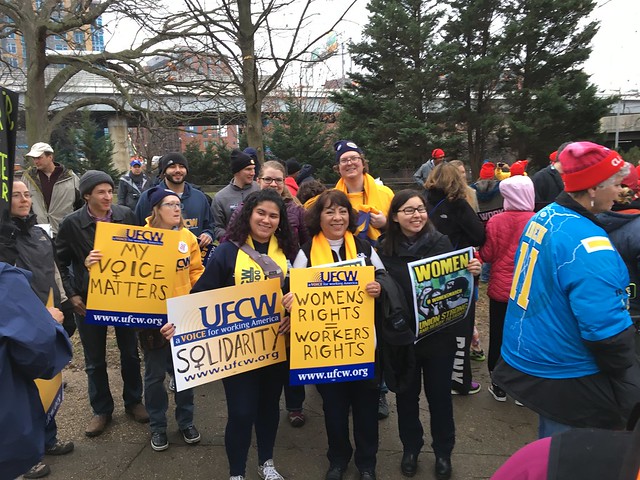 Statement on the Supreme Court

“Today’s decision is deeply disturbing.  The highest court in our nation has turned its back on collective remedy for workers facing widespread injustices.  The UFCW will continue to demand accountability from Walmart to its workers who deserve fair treatment, fair pay and respect on the job.

“Last week, thousands of Walmart workers announced the Organization United for Respect at Walmart because workers know that they are stronger as a group. Employers like Walmart have long attempted to isolate workers and prevent them from solving problems together.  This decision will not stop workers from joining together, through collective action, or prevent them from continuing to pursue their individual claims against Walmart.

The UFCW believes that Walmart is not too big for justice and will continue to hold Walmart to fair workplace standards.  Its 1.4 million associates deserve better.”

Making Change at Walmart seeks to promote the American values of equality, dignity and respect in the workplace. The campaign is making change by working directly with Walmart Associates to claim the respect on the job they deserve, holding Walmart corporate managers accountable to hourly employees and the public for their practices and joining with community leaders in major cities across America to make sure that any new jobs offered by Walmart meet strong standards for healthy, growing communities.