Adam Grandin works in the kitchen of the Green Fields Market in Greenfield, Mass., as part of a food co-op with stores in two towns in Western Massachusetts. Over a period of time, Grandin and many of the workers at his store, and the other Franklin Community Co-op – Mc-Clusker’s Market in Shelburne Falls – had grown increasingly frustrated with a workplace that had moved further and further from a cooperative vision.

Health care was unaffordable and the lack of respect by management for employees’ hard work made the work environment increasingly unfriendly.

Fed up and deciding to do something about the unfair working conditions at the co-op, Grandin and his coworkers formed an organizing committee and reached out to UFCW Local 1459. Once approximately two-thirds of the 75 workers at the Franklin Community Co-op demonstrated their interest in unionizing, Grandin and the others moved forward in the process.

While the co-op board backed the workers, organized opposition forced another vote.  Other union workers, members of Local 1459, Jobs with Justice, and the local Occupy movement united with co-op members to show their support for the organizing workers. And it paid off.

On August 15th, the co-op board recognized the workers’ new union, Local 1459, and they will soon begin
bargaining for a new contract. 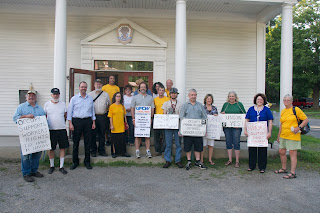 “I think it’s the best thing that ever happened to the co-op,” said Grandin.

The efforts of workers fighting for better jobs, as well as the Locals of UFCW and other organizations in our communities can together make progress our country’s working people.  Fair treatment and good jobs should be a right, and when we stick together, they are a reality.