UFCW Members Are Making the News 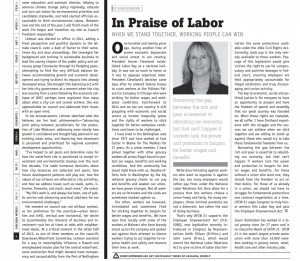 UFCW members like Susan Richardson from UFCW Local 21, are making their voices heard on the opinion pages of newspapers across the country.

UFCW members are making their voices heard on the opinion pages of newspapers across the country. In the past few weeks, UFCW members have had op-eds and a letter to the editor published on topics ranging from Labor Day and the benefits of union membership to the recent Market Basket grocery boycott.

Susan Richardson, a grocery store worker and UFCW Local 21 executive board member, had an op-ed published in the Cascadia Weekly (scroll down to page 6) regarding Labor Day and her support of the Employee Empowerment Act, new legislation that would amend the National Labor Relations Act to give victims of labor discrimination the same protections available under the 1964 Civil Rights Act.

“Narrowing the gap between rich and poor is essential to rebuilding our economy, but that can’t happen if workers lack the power and protection to bargain for better wages and benefits.”

Michael Pajewski, a member of UFCW Local 23, had a letter to the editor published in the Pittsburgh Post-Gazette regarding Labor Day and how all workers have benefited from unions.

“Whether you are a union worker or not, you have enjoyed the benefits of union negotiations: the 40-hour work week, holiday pay, vacation time, overtime pay and safety standards where you work.”

And Jeff Goldhaber, a Stop & Shop worker and UFCW Local 1445 shop steward, had an op-ed published in Labor Notes regarding Market Basket workers and the benefits of having a union voice on the job.

“Customers boycotted Market Basket not because of loyalty to a CEO they’ve never met. They boycotted because they wanted to support the store workers they know and preserve the community that’s been built up around these stores. If we really want to save Market Basket, we need to address the workers’ concerns.”

These are just a few examples of how UFCW members are making their voices heard in their local newspapers.  We look forward to highlighting additional op-eds and letters to the editor by UFCW members throughout the year.