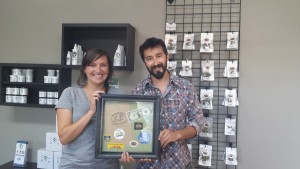 “With our new contract, I am excited to have paid holidays and vacation time,” said Kyle Maestra, a site manager at Stoney Brothers. “That is unusual in the cannabis industry.”

The three-year contract includes salaries starting at $15/hour with some making as high as $34/hour, regular raises, affordable health insurance through a multi-employer fund, pension contributions, paid vacations and sick leave, as well as seniority and grievance protections.

“All workers deserve the benefits of a union contract,” said Dan Clay, President of UFCW Local 555, “and workers in the cannabis industry are no different. Starting with the workers at Stoney Brothers, we can build a home-grown Oregon cannabis industry that respects workers and provides good, family-supporting jobs.”

Workers at Stoney Brothers have expressed excitement about their industry-leading compensation package.

“Health insurance is important to me,” said Hannah Poole, a patient consultant at Stoney Brothers. “My union health insurance plan is comprehensive and gives me real peace of mind.”

Stoney Brothers and UFCW Local 555 look forward to growing together as the company plans to open several new retail and growing facilities in the near future.