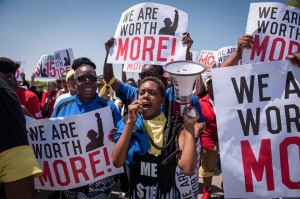 Seventy-two percent of underpaid workers approve of labor unions, and 75 percent support a $15 minimum wage and a union according to the first-ever poll of workers paid less than $15 an hour.

The poll, released last Monday by the National Employment Law Project (NELP), follows on an April 2015 NELP study that found 42 percent of workers in the nation are paid less than $15 an hour. With the presidential campaign season heating up and Democrats convening next week for their first candidate debate, the poll looks at the voting preferences of this critical demographic of underpaid workers:

The poll is the latest in a band of research demonstrating growing public support for unions and the importance of unions in the economic recovery. A recent Gallup Organization poll found a sharp uptick—to 58 percent—in approval of labor unions amongst the general population; the poll released today shows a significantly higher level of support among underpaid workers—higher than any Gallup study has recorded for the general population since 1959:

“We’ve long known that unions help create good jobs and boost the economy, and now we know that underpaid workers share that view as well,” said NELP Executive Director Christine Owens. “An overwhelming majority want $15 and a union—and a president who will stand behind them in support of these basic rights. Underpaid workers in our country are a powerful force to be reckoned with in the workplace and the voting booth.”