This month, the story of a group of immigrant workers who organized and formed a union with UFCW Local 328 at Bob’s Tires Company in New Bedford, Massachusetts, back in September was highlighted in the November issue of Common Ground.

On Wednesday September 23rd, 2015, the workers of Bob’s Tire Company in New Bedford, Massachusetts voted 65-5 in favor of having UFCW Local 328 represent them during contract negotiations with the company. This was a significant and historic victory for the city of New Bedford, which maintains a very large Central and South American workforce. The workers of Bob’s Tire belong to the K’iche’ ethnic group from Guatemala, and their decisive victory marked the first time a group of workers from the Mayan community have organized with a union. 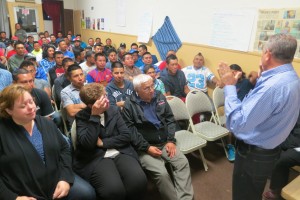 Meetings with the workers from Bob’s Tire, who are employed by the temporary agency BJ’s Temp Service, began when a delegation of well over half the workforce attended a meeting at CCT, a New Bedford community organization that specializes in fighting for social and economic justice for Latin Americans in the city. Between two meetings held over the course of five days, over 75% of the workers signed union authorization cards, leading us to file a petition shortly thereafter. 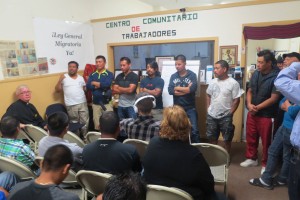 None of this work could have been possible without the help the Local received from the head of CCT, Adrian Ventura. Adrian’s exhaustive efforts for years in the field of social justice advocacy speak volumes not only of his character, but of his commitment to the workers of New Bedford. Working with Adrian and Jobs with Justice, the Local continued to hold meetings with the workers  Election Day rapidly approached. 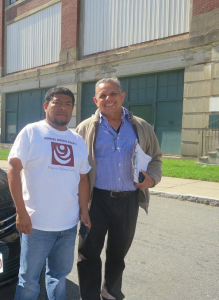 When polls finally opened at 6am at the New Bedford facility, and over the next two hours a majority of the workers cast their ballots until the first block of voting concluded at 8am. The polls opened again at 11am, allowing anyone who had yet to cast a vote to do so, and then closed for the last time at 1pm. As one of the committee members, company officials, community group leaders and union organizers looked on, the representative from the National Labor Relations Board in Boston began tallying the ballots. By the end, a very large pile of “YES” ballots sat next to a diminutive pile of “NO” ballots. The results were signed by the company and the Local, and the first step of a long process toward social and economic justice for the workers of Bob’s Tire was over.

The enormity of this success cannot be understated. A 65-5 vote is not only indicative of the strength of the collective willpower of the workforce at Bob’s Tire, but it is also a reflection of what can be achieved when workers come together to demand a higher quality of life for themselves and for their families. These workers have sent a strong message to the owners of not only this company, but to businesses throughout the city: injustice will not be tolerated, and that workers are willing to stand collectively against it. The workers at Bob’s Tire also sent a message to New Bedford’s K’iche’ community, its Latin American community, and to the city as a whole: the time for worker action is now. The workers at Bob’s Tire are willing to fight to improve their working conditions, their wages, and their benefits. We hope that other workers in the city and beyond take note, and recognize that by working together and speaking as a strong, unified voice, great things can be achieved. In the meantime, congratulations to the workers at Bob’s Tire Company, and we look forward to working with you in the weeks, months, and years to come. 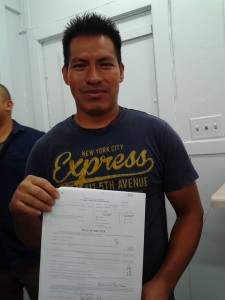 Tomas Ventura, member of the Bob’s Worker Committee and the union observer for the election, holding the final tally.

To see more photos of the workers from Bob’s, see the photo album. (photo credit to Lisa Maya Knauer)