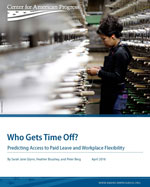 Image via Center for American Progress

A new report by the Center for American Progress underscores the uneven access to paid leave and fair schedules in the American workforce and the need for legislation to address these issues.

More needs to be done to address the huge swath of American workers who are at the mercy of their employers and at risk of losing wages or being fired if they need time off to recover from an illness or care for a family member. While legislation has been introduced to address access to paid leave and workplace flexibility, it is still too slow and uneven to affect the majority of working families. Since 2002, only three states have passed laws to provide workers with access to paid family leave; 23 cities and five states have guaranteed workers the right to earned sick leave; and one city and one state have implemented policies to ensure that workers have access to fair schedules.

A full copy of the report can be found here.