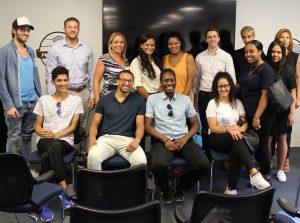 This week, after a majority of the workers at Zara’s eight stores in Manhattan signed cards stating they wanted to be represented by RWDSU/UFCW Local 1102, the company agreed to recognize the union.  The agreement covers over 1,000 retail workers at all of Zara’s stores in Manhattan.  These are the first Zara workers in the United States to be unionized.

Zara, the Spanish fashion chain owned by Inditex, is the world’s largest clothing retailer.  The RWDSU/UFCW and Zara reached an agreement earlier this year where the employer agreed to remain neutral and not to oppose the union’s attempt to organize its workforce.

“Zara’s approach to recognize the right of its workers to form a union, without intimidation, is a message to all retailers – you can be successful and still respect the right of your employees,” said Gemma de Leon Lopresti, president of RWDSU/UFCW Local 1102.

Workers at Zara look forward to working in an environment where they can make their jobs better, and create better lives for themselves and their families.

“Working in retail is extremely fast-paced and hectic,” said Joseph Minton, an associate at Zara’s 59th Street location.  “I’m excited that the company is willing to listen to our concerns and work with the union for everyone’s benefit.”

“We applaud Zara for recognizing the rights of its employees to choose to unionize, without interference,” said RWDSU/UFCW President Stuart Appelbaum. “Unfortunately, too many American employers refuse to respect their workers’ right to freedom of association and intimidate and threaten workers who try to organize.”

“This process is a huge step for retail workers in New York. Zara, the largest fast-fashion retailer in the world, is sending a strong message that you can remain profitable and still recognize your workers’ right to dignity, justice and respect on the job,” said Appelbaum.