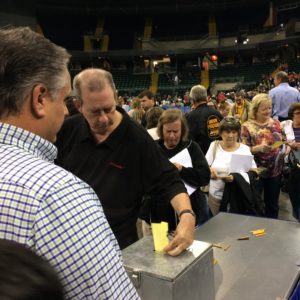 Members of UFCW Local 655 who work at Schnucks in St. Louis ratified a new contract on Oct. 26.

“I’m very grateful we have a new contract. I’m a pharmacy technician at Schnucks, but I was also a member of the bargaining committee, and that was an eye-opening experience,” said Rebecca Garrett. “I have a whole new respect for the process of bargaining a contract. I’m happy we were able to maintain health benefits and I’m especially happy that for the first time this contract has specific language and recognition for pharmacy technicians because we have a very important role in people’s lives. This contract took months of very hard work, and without a union like mine, there wouldn’t be an opportunity to have input at all. This is why I’m a strong supporter of UFCW Local 655. They give us a real voice at work.”

“While this contract does not have everything we wanted, it does represent significant improvements over the last proposal,” said UFCW Local 655 President David Cook. “Our members deserve to be recognized for their sacrifices with a fair contract. The significant concessions from Schnucks shows they understood that and came back to the table with a much better contract.”