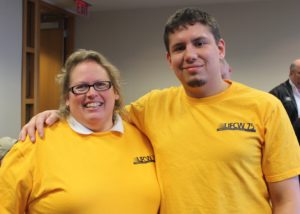 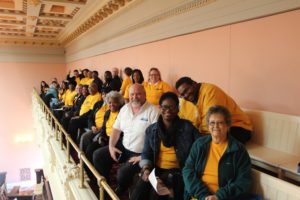 More than 70 members from UFCW Locals 75 and 1059 went to Columbus, Ohio, on March 29 to speak with state legislators about the harmful effects of “work for less” laws.

A “work for less” bill was introduced in Ohio in February of this year, but so far it hasn’t gained any traction and legislative leaders in both parties have openly questioned the need for it. UFCW members like Bill Finnegan, who works at Campbell’s Soup in Napoleon, Ohio, are a big reason why “work for less” legislation hasn’t had enough support to pass. 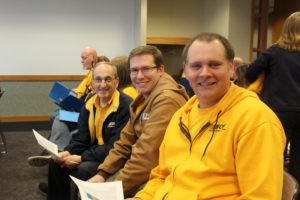 “This is my second lobby day and I chose to come here today to speak with my representatives and senators about the issues that impact the lives of my family and friends,” said Finnegan. “The top concern on that list right now is ‘work for less’ legislation because it would weaken the power and voice of workers all across Ohio.”

In meetings throughout the day with state legislators, UFCW members explained how “work for less” legislation directly threatens every hard-working family, whether they’re part of a union or not. Multiple representatives and senators remarked afterwards that hearing personal stories from people about why they’re so concerned about “work for less” legislation was much more effective than simply showing them the usual facts and graphs.

After the last meeting wrapped up, Finnegan talked about why he enjoyed participating in lobby days and other similar events.

“Getting to do stuff like this and meeting other members of our union are why I really enjoy being a part of UFCW,” he said. “Oftentimes after we hold events like this people will come up to me at work and ask how they can be a steward or become even more involved. Days like today make us realize that we have numbers and with that comes power.”