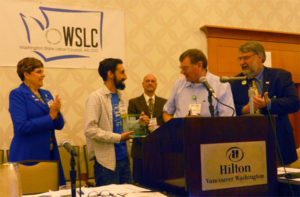 Photo courtesy of The Stand

On July 19, WPEA /UFCW Local 365 member Jason Holland was honored with the Mother Jones Award from the Washington State Labor Council for his efforts to help local farm workers at Sakuma Brothers Farms in Burlington and Mt. Vernon, Wash., organize and secure a strong union contract. Holland works as an organizer and researcher at WPEA/UFCW Local 365.

The farm workers, from Oaxaca, Mexico, realized that there was strength in numbers and formed the first new farm worker union in the country in over 20 years—Familias Unidas por la Justicia (FUJ). Using his law degree from Vanderbilt University, Holland supported FUJ’s efforts by writing the contract the workers would bring to the negotiating table. He also marched and protested alongside FUJ members in solidarity, receiving no compensation for his work – besides knowing he stepped up to help fellow hard-working men and women in need of a strong union family.

As he accepted the Mother Jones Award, Holland reflected on his work with members of FUJ and how the experience changed his life. “When you see injustice, don’t just stand there and let it happen,” he said. “Take action.”

You can see Holland accept the Mother Jones Award here.