Local 400 Passes Resolution in Reaction to Violence in Charlottesville 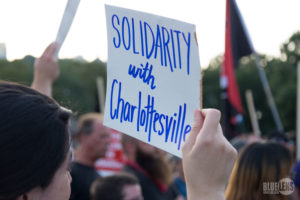 On August 16, the board of directors of UFCW Local 400 passed an official resolution condemning white supremacy and the violent actions of bigots in Charlottesville, Va., earlier this month.

“Now is a time to make it clear what we stand for,” said UFCW Local 400 President Mark Federici. “Unity and solidarity are core values of our union family. We embody the diversity that makes our country great. The hard-working men and women of Local 400 stand together for a better life for all Americans. Hatred simply has no place in our union or in our country.”

UFCW Local 400 has nearly 11,000 members who live and work in Virginia, including grocery workers at three Kroger stores and one Giant Food store in the city of Charlottesville. The resolution was approved by a unanimous vote of the board of directors at a regularly scheduled meeting on Wednesday.

The resolution mourns the death of Heather Heyer and further expresses full support of “all counter-protesters who demonstrated against the hateful white supremacists.” In addition, the board resolution mourns the deaths of Virginia state troopers, Lt. H. Jay Cullen and Trooper Berke M. M. Bates, who lost their lives in the line of duty while serving the Commonwealth.

The full text of the resolution is below:

WHEREAS, nearly 11,000 United Food and Commercial Workers (UFCW) Local 400 members live and work in the Commonwealth of Virginia;

WHEREAS, we are proud that our membership reflects the racial, ethnic, sexual identity, and religious diversity of the Commonwealth and our great nation;

WHEREAS, although racism is hardly a new phenomenon in the United States, the Southern Poverty Law Center has recorded a significant spike in hate crimes since Donald Trump’s election, as well as violent gatherings of white supremacists, including the deadly events in Charlottesville, Va., last weekend;

WHEREAS, the wealthy and powerful have always used the politics of hate, division, and racism to divide the working class and weaken unions;

THEREFORE, LET IT BE RESOLVED that UFCW Local 400 condemns the racist, violent actions of Nazis, and white nationalists, and attendees of the “Unite the Right” rally in Charlottesville this weekend.

LET IT FURTHER BE RESOLVED that UFCW Local 400 rejects in the strongest possible terms the ideology of white supremacy.

LET IT FURTHER BE RESOLVED that UFCW Local 400 mourns the death of Heather Heyer and will fight like hell for the living in her name.

LET IT FURTHER BE RESOLVED that UFCW Local 400 is deeply saddened by the deaths of two Virginia state troopers, Lt. H. Jay Cullen and Trooper Berke M. M. Bates, who lost their lives in the line of duty while serving the Commonwealth;

LET IT FURTHER BE RESOLVED that UFCW Local 400 recommits ourselves to the struggle for racial and economic justice, gender equality, and human and civil rights for all, and stands in solidarity with anyone who is fighting for the same.