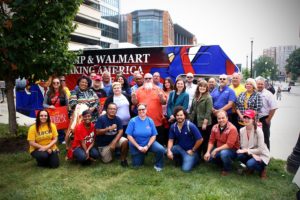 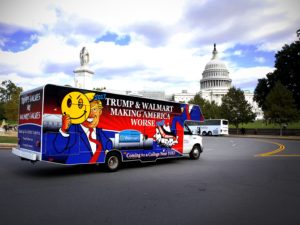 On Oct. 4, Making Change at Walmart (MCAW) ended its “2017 Trump & Walmart Make America Worse” tour at the University of Virginia’s campus in Charlottesville. Tour organizers visited 30 college campuses from September 5 to October 4 to expose the shared values and agenda of Trump and Walmart, which promote the privatization of our public education system and profit from a low-wage economy. The campaign reached 1.6 million college students through digital ads at targeted campuses along the tour, and signed up over 2,500 students to join the campaign to stop the Trump and Walmart agenda.

A large part of the tour utilized social media, digital ads, student video interviews, and text messaging to effectively engage college students about the Trump and Walmart agenda and sign students up to the MCAW campaign. Tour organizers also asked students via an online survey if they think Trump and Walmart make America better or worse. Out of the 1,573 people who responded, 94 percent said worse, five percent said better, and only one percent didn’t answer.

“This tour gave us the opportunity to connect with students and leaders who will be key partners in promoting a culture that values where you shop and who you support,” said MCAW Director Randy Parraz.