In 2017, workers from around the country who work in a variety of industries ranging from food and non-food retail to health care stood together for a better life by joining our union family. 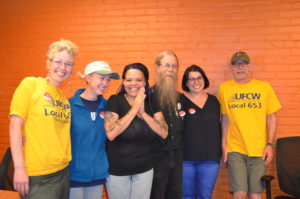 Seward Co-op members stood together and voted to join UFCW Local 653 in June.

Max Storey, who works a Seward Community Co-op store on Franklin Ave. in south Minneapolis joined his colleagues at two other Seward Co-op stores in the area and voted to join UFCW Local 653 in June. Earlier in June, the workers at the three stores, including the Creamery Café, the Seward Franklin store on Franklin Ave., and the Seward Friendship store at 38th St. and Clinton Ave., held a rally for a voice in the workplace after submitting cards authorizing representation by UFCW Local 653 to the National Labor Relations Board.

“Workers have come together to say yes to UFCW 653, yes to fair wages, yes to negotiating better benefits, and yes to respect and dignity in the workplace,” said Storey. 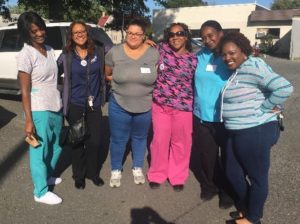 Tierra Griffith, a Certified Nursing Assistants at Delmar Nursing and Rehabilitation Center Delmar, Delaware, voted to join UFCW Local 27 in September along with 89 of her coworkers.

Griffith and her colleagues were concerned about not receiving any raises over the last several years, unfair treatment by management, not having a voice on the job, understaffing, and questionable PTO calculations. Even though the company hired union busters and tried to intimidate some workers using fear tactics, the workers stood strong and formed a powerful organizing committee.

“It feels awesome to have Local 27 be our representatives. We all feel like it will make a positive difference here at work. We’re now ready for the next step, which is to get a contract that we’re happy with,” said Griffith.

Here’s a list of the organizing victories that appeared in OnPoint this year: