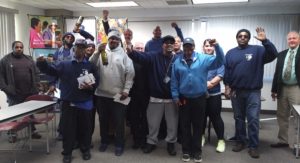 On Dec. 7, 35 members of UFCW Local 919 who work at Community Renewal Team (CRT) in Hartford, Connecticut, unanimously ratified a new contract. The CRT workers are employed as general kitchen workers, food preparation workers, cooks and drivers. CRT works with local officials, providers, private funders and the public to address challenges such as hunger, homelessness and unemployment, and helps individuals and families in Hartford take steps toward a healthy and economically stable future.

The three-year contract guaranteed raises for each of the three years for all employees, including the higher paid members that were “redlined” in their previous contract, and allows more members to take advantage of 401(k) benefits. The contract also includes sick leave improvements, a more efficient grievance procedure, as well as improved supplied uniforms for the drivers.