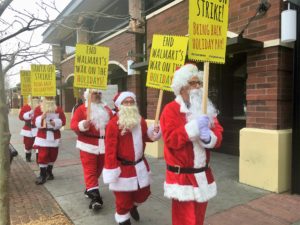 With Santa’s help, Making Change at Walmart (MCAW) launched a series of strike actions at Walmart stores across the country in December to protest the retail giant’s refusal to provide its 1.5 million workers with holiday pay. The “Santa Claus on Strike” actions were held in 13 cities, including Phoenix, Las Vegas, Seattle, Portland, Cincinnati and Memphis. At each action, Santa and his holiday helpers made all those who love Christmas aware of Walmart’s “no holiday pay” policy.

Walmart eliminated holiday pay in 2016, replacing it with a policy where workers accrue paid time off based on hours worked. Under this policy, a new part-time Walmart worker has to work 33 hours to get just one paid hour off, which could take weeks to accrue given Walmart’s inconsistent scheduling. Holiday pay, for those who work on the holiday, typically includes a premium above and beyond what they are paid hourly. And, in the case of many union retail workers, they are given holiday pay even if they don’t work that day.

“Santa Claus is on strike for one simple reason: It’s time Walmart do the right thing and provide holiday pay for its 1.5 million hard-working men and women – the same holiday pay it used to provide in 2015 before it decided to “Grinch” its workers,” said MCAW Director Randy Parraz. “To be very clear, this initiative is about more than Santa Claus and Christmas, it’s about the values that the holidays represent and which Walmart has chosen to ignore.”

The “Santa Claus on Strike” actions were the second phase of MCAW’s six-week holiday initiative to highlight Walmart’s “war on the holidays.” MCAW’s holiday campaign has included grassroots events at Walmart stores, targeted paid media, including two national TV ads, aggressive social media, and outreach to civic and community leaders, all with the important goal of having Walmart end its policy of refusing to provide holiday pay to its workers.

“Walmart earns millions of dollars from not paying its workers holiday pay – this is wrong and it must stop. The extra pay millions of other American workers earn during the holidays make a difference, and Walmart workers deserve no less,” said Parraz.