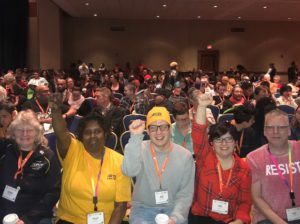 UFCW OUTreach scholarship winners who are members of UFCW Locals 23, 367, 400 and 653 attended the Creating Change Conference in Washington, D.C., on Jan. 24 to 28. The conference was organized by the national LGBTQ Task Force and is the foremost political, leadership and skills-building conference for the LGBTQ social justice movement.

UFCW OUTreach Executive Board members have served as a key voice for working class and labor issues at the Creating Change Conference during the past two years, and providing scholarships to UFCW members so that they can attend this conference is a critical step in recruiting and developing new leaders within our union and in the broader LGBTQ movement.

Here are some excerpts from their essays, which were part of the scholarship application process:

“I believe what I can learn at this conference will not only help to mentor LGBTQ youth in my community, but will give me the skills I need to help LGBTQ union members realize how being a union member means they have support and are equal to and have the same rights as all other union members.”

“Contract language is only one part of the equation. It’s only effective if workers are actively and consistently engaged in creating a culture of inclusion, respect and accountability to one another and holding ourselves to a standard that promotes a just and affirming workplace. That’s why I organized a union in the first place and striving to make that vision everyday practice is what keeps me invested in this ongoing project!”

“I would like to attend the Creating Change conference to acquire skills and tools to help such workers in the Pittsburgh area, as well as to assist in building political power in our quest for social and economic justice.”

“I hope this scholarship program will continue because it will give other LGBT and all the letters of Rainbow Union members an opportunity to know we are not in this fight alone,” said Miller, after attending the conference. “I also hope that we, as union members, can have a booth there next year to catch the nonunion members and explain how important unions are for our fellow community—like with our written contracts that say we cannot be discriminated against just because of our gender preference.” 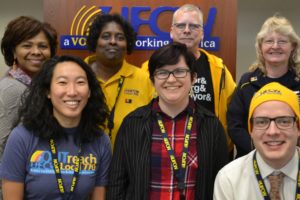