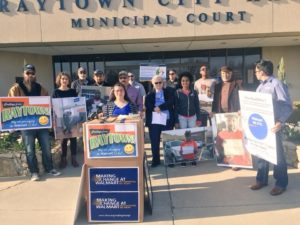 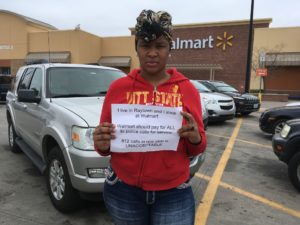 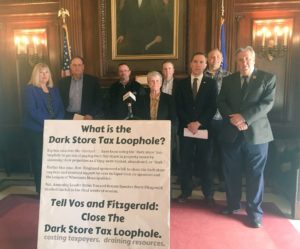 Making Change at Walmart (MCAW) held events in Missouri and Wisconsin on April 17 to draw attention to Walmart’s practice of shifting the cost of dealing with crime in its stores to taxpayers and using a tax loophole to avoid paying property taxes.

In Missouri, MCAW held a press conference with the residents of Raytown and Independence in front of Raytown’s City Hall to highlight Walmart’s reliance on local police officers to address theft and other petty crimes at its stores, draining much-needed police resources away from the rest of the community. MCAW also announced the creation of a new citizen-led task force in Raytown, “Citizens Against Walmart Taxpayer Abuse of Police Resources,” to address this problem.

“Given Walmart’s refusal to address the problem of offloading it anti-theft security costs onto communities like Raytown and Independence, citizens have decided to take action,” said Randy Parraz, national director for MCAW.

“Over 200 members of the Raytown and Independence communities have spoken on who they think should pay for police at Walmart. But since Walmart refuses to hire enough anti-theft personnel to meet what it wants and continues to drain taxpayer resources, leaving Raytown in a budget and police resource crisis, it’s time for the citizens of Raytown to take matters into our own hands,” said Raytown taxpayer and homeowner Katie Phelan.

Big box retailers like Walmart have been using the “dark store” tax loophole to reduce their property tax rates by insisting that the assessed value of their properties is comparable to that of nearby vacant, abandoned, or “dark” big box stores. This tax loophole unfairly shifts the property tax burden to homeowners and reduces the amount of funding available for public schools.

After the event, MCAW and other members of the group delivered the “Rotten Apple Award” to Wisconsin Senate Majority Leader Scott Fitzgerald and Assembly Speaker Robin Vos for continuing to deny public school funding by allowing Walmart and other retailers to get away without paying their fair share in property taxes.