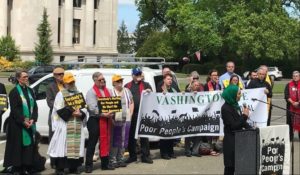 UFCW locals are gearing up for the fifth week of the revival of the Poor People’s Campaign, which will focus on jobs, the economy, and housing. This campaign builds on the legacy of Dr. Martin Luther King Jr. and others, who organized actions in 1968 to demand economic and human rights for poor Americans of all backgrounds.

“The Poor People’s Campaign: A National Call for Moral Revival,” was founded by Rev. Dr. William Barber II and Rev. Liz Theoharis, the Kairos Center for Religions, Rights and Social Justice at Union Theological Seminary, and hundreds of local and national grassroots groups. The campaign launched on May 13, and has held events across the country since that time as part of its “40 Days of Moral Action” for the purpose of challenging systemic racism, poverty, the war economy, ecological devastation, and the nation’s distorted morality.

On June 11, the campaign is holding events at state capitols across the country around the theme “Everybody’s Got the Right to Live: Jobs, Economy and Housing.” The campaign will conclude its “40 Days of Moral Action” on June 23 with a “Global Day of Solidarity” rally in Washington, D.C. 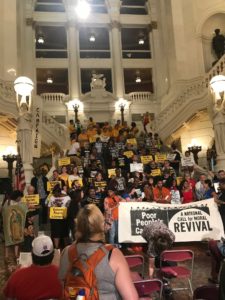 “The Poor People’s Campaign believes, as our union family does, that our economy can and should work better for everyone,” said UFCW International President Marc Perrone. “Wage inequality, the assault on voting rights, underemployment, and the attacks on immigrant and refugee communities are all part of a systemic effort to disenfranchise poor communities. We’re proud to support the Poor People’s Campaign because, if successful, it will bring hard-working families more power to build better lives.”