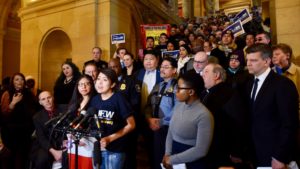 Every member’s voice deserves to be heard, especially on issues that impact their jobs and their families. UFCW Local 663 is helping its members speak out in support of a new bill that strengthens economic opportunities for communities across Minnesota. The bill is H.F. 1500, the License Access and Public Safety Act, which will open up a road of opportunity not only for our members, but for all workers in the state of Minnesota.

On Feb. 21, UFCW Local 663 and Freedom to Drive MN coalition partners joined Minnesota House Majority Leader Ryan Winkler at the state capitol in St. Paul, Minn., in support of this bill, which would expand eligibility for obtaining a driver’s license or Minnesota identification card to include all members of the workforce.

Veronica Orellana, a student from Worthington, Minn., and the daughter of UFCW Local 663 member José Orellana, shared what this bill would mean for her family.

“My mother and father work hard to provide for our family,” Orellana said. “They work to build us a better life together. As the next generation, I see that every day. Every Minnesotan deserves the chance to live, grow and go wherever we want to without fear. That’s why I’m supporting this bill.”

“Our union drives Minnesota forward when we invest in people,” said UFCW Local 663 President Matt Utecht. “Access to driver’s licenses is the right thing to do. Expanding access to driver’s licenses for all people of age, regardless of status, supports our UFCW union families—in Worthington, Madelia, Butterfield, Luverne, Twin Cities and all the way to Pequot Lakes. But it’s not just about our UFCW 663 union family. It’s bigger than that. Union membership isn’t just about fighting for our union families, it’s about fighting for better lives for all working families. And that’s why we support driver’s licenses for all.”

UFCW Local 663 is one of the leaders of the Freedom to Drive MN coalition, which includes nonprofit organizations, other unions, community advocates, faith-based organizations, workers’ rights advocates and local businesses.