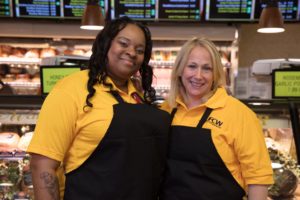 The UFCW has a proud history of negotiating strong contracts that protect workers from discrimination and help them obtain equal pay for equal work. Over the past few weeks, the International’s Legislative and Political Action Department has taken action on the federal level by urging members of Congress to narrow the gender pay gap by supporting and passing the Paycheck Fairness Act (H.R. 7) so that all workers have an opportunity to advance in the workplace. On April 2, their hard work paid off when the House of Representatives passed this legislation, which was sponsored by Rep. Rosa DeLauro (D-Conn.) and Sen. Patty Murray (D-Wash.). This legislation will provide women with the necessary tools to challenge pay gaps and gender-based discrimination.

For women who don’t belong to a union, gender pay discrimination is a persistent problem in the workplace. Women are typically paid only 80 cents for every dollar paid to men, and the pay gaps are even larger for women of color. The Paycheck Fairness Act updates and strengthens the Equal Pay Act of 1963 by closing loopholes that have allowed employers to pay women less than men for the same work. It prohibits employers from relying on salary history in determining future pay and requires them to prove that pay disparities are based on factors other than gender. It also protects employees against retaliation for discussing salaries with colleagues and removes obstacles to participation in class action lawsuits regarding pay discrimination.

The passage of the Paycheck Fairness Act in the House of Representatives is an important step toward ending gender-based discrimination. While belonging to a union is still the surest way to guarantee equal pay on the job, with unionized women making approximately 27 percent more than their nonunion counterparts, the Paycheck Fairness Act would provide new and important tools to close the wage gap. The UFCW applauds the men and women of the House prioritizing the passage of this important bill and urges the Senate to pass this legislation immediately and ensure that women don’t go another day without making equal pay for equal work.

To learn more about what the Legislative and Political Action Department is doing to level the playing field for women and all workers, contact your region’s legislative point person in the department. If you are unsure about who your assigned representative is, reach out to Shannon Harris at sharris@ufcw.org.