Congress Acts to Protect Workers and Families From Discrimination 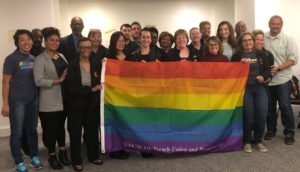 On May 17, the U.S. House of Representatives passed the Equality Act of 2019 (H.R. 5), which strengthens protections for workers and families across the country and helps to end discrimination that has impacted so many communities.

UFCW OUTreach chair Michele Kessler praised the action by Congress to pass the bipartisan bill, which was endorsed by the UFCW OUTreach board on March 19.

“Today’s passage of the Equality Act by the House is a powerful step toward a future where millions of LGBTQ Americans and their families no longer have to worry about facing discrimination at work or in their communities,” Kessler said. “Too many Americans live in states with outdated laws that leave our LGBTQ neighbors, friends, and family vulnerable to discrimination.”

Despite major advances in equality, the majority of states still do not have explicit LGBTQ nondiscrimination protection laws. The Equality Act of 2019 would ensure full federal nondiscrimination equality by adding sexual orientation and gender identity to other protected classes, such as race or religion, in existing federal laws.

“Everyone deserves equal access to the employment, housing, and education they need to provide for their families and build a better life,” Kessler added. “We are proud to stand with Americans across the country in support of the Equality Act and urge the Senate to do the right thing and pass this bill immediately.”