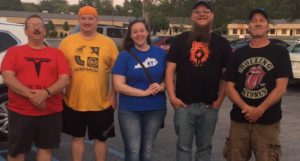 On July 31, Sodexo food service workers at St. Joseph’s Hospital in London, Ky., joined UFCW Local 227 for better wages and a voice in the workplace. These workers joined our union family because they were concerned about low staffing levels, favoritism, little to no wage increases and new hires receiving higher rates of pay than workers who have been there for 10 years or longer.

Sodexo is one of the world’s largest multinational corporations, with headquarters in France. The International Union of Food, Agricultural, Hotel, Restaurant, Catering, Tobacco and Allied Workers’ Associations (IUF) has an agreement with Sodexo regarding the right of workers to unionize. Section 3.3 of the agreement with IUF addresses the right of Sodexo employees to establish and join labor organizations without fear of retaliation, repression or any other form of discrimination and Section 5 addresses freedom of association, union recognition and collective bargaining. Showing the workers that their employer had publicly agreed to their right to join a union was one of the factors that made this organizing campaign a success.

“We’re excited to welcome the newest members of our union family,” said UFCW Local 227 President Bob Blair. “Their vote to join our union makes Local 227 stronger and gives these hard-working men and women the incredible benefits of union membership.”