The workers at the Viscofan plant in Danville, Illinois, deserve safe jobs, they say in a newly launched petition to The Viscofan Group Chairman Jose Domingo de Ampuero y Osma. The workers, who are members of UFCW Local 686, and their families shouldn’t have to worry whether their loved ones will come home in one piece when they return from work each day.

After a successful year, Viscofan has seen positive growth, which is centered on the work done by these members and others in North America. But as company sales and profits increase, the workers say they are being hurt by the plant. The Danville plant had 18 violations of U.S. health and safety law in the last seven years, yet Viscofan has refused union proposals to improve the safety of their workplace.

These Local 686 members are now asking supporters to sign their petition that says the company’s success shouldn’t come at the expense of the health and safety of its workers. The Viscofan plant is an integral part of the Danville community and its workers count on the good, safe, family-supporting jobs it provides. They are asking the company to send its negotiators back to the table with an edict to make the plant safer, the community stronger, and share in the success. Click here to sign the petition. Need a last minute gift for your loved ones this Valentine’s Day? To support your union family, pick up any of the tasty treats that union members make, and shop at union label retail and grocery stores. Below are just a few of the things made by UFCW and other union members that might help you celebrate that special someone!

And with your Union Plus discount, you can pick up flowers and chocolates at a great discounted price! Click here for more info.

[aesop_quote type=”pull” background=”#282828″ text=”#ffffff” align=”center” size=”2″ quote=” I am not afraid. I know we can work together to change our workplace and make it better for everyone.”” parallax=”on” direction=”left”] 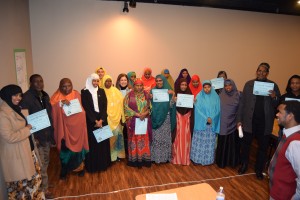 Some of the participants in the training pose with their completion certificates.

This past Saturday, UFCW Local 1189, the UFCW Occupational Safety and Health Department and the Greater Minnesota Workers’ Center hosted a workers’ rights training session for unorganized poultry workers in St. Cloud, Minn. The training was focused on giving unorganized workers tools to stand up for a safe workplaces and helping them build common ground with workers of different cultural backgrounds. More than 70 workers from a variety of plants came out for the training, which was simultaneously conducted in English, Spanish and Somali.

“I am really glad I came to this training with the Somali people,” said one Spanish-speaking worker during the comment portion of the training. “I tried to get my friends to come with me but they were too afraid. I am not afraid. I know we can work together to change our workplace and make it better for everyone.”

UFCW and JBS Partner Together for Joint Safety Trainings

[aesop_quote type=”block” background=”#084e93″ text=”#ffffff” align=”center” size=”2″ quote=”It was great to see everybody working together in the setting to make our plant safer. During our walk-through, it was good to have a new set of eyes to help spot hazards that might have otherwise been overlooked.” cite=”Darin Rehnelt, representative for UFCW Local 1161″ parallax=”on” direction=”left”] 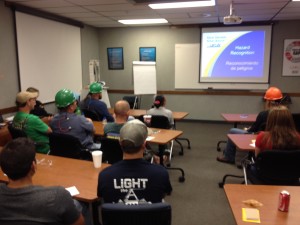 The first part of the program focuses on training union reps, workers, staff, and JBS management to learn about identifying the underlying causes of workplace injuries, illness, and fatalities. The second part trains participants on how to correct, control, and prevent those workplace hazards. The ultimate goal is to develop a sustainable system where people in the plant know how to prevent hazards, how to identify them, and how to follow the correct procedures to efficiently correct hazards. 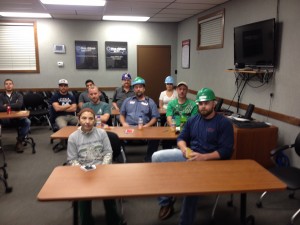 “The joint training has been a very positive experience for all parties involved. It has provided some different ways of looking at the hazards in the workplace that most people overlook. I am excited to continue with this training in our facilities and providing our employees a safer environment to work in,” said Marvin Spidle, corporate safety manager from the Federal Business Unit at JBS.

The program began in January, and JBS workers at UFCW Locals 540, 1161, 293, and 435 have already gone through the first phase of the training. During the first phase of the program, workers and staff learned how to identify workplace hazards in their plant. Following the classroom training, participants then walked together through their plant to apply their new knowledge and identify any hazards that they learned about in the training. Some common safety hazards that workers are trained to spot include unguarded shafts and belts, slippery floors, narrow aisles, and unlabeled exposed pipes and electrical wires. 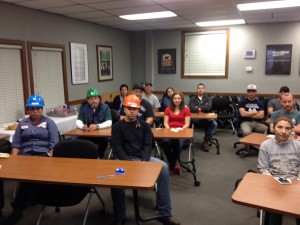 “It was great to see everybody working together in the setting to make our plant safer. During our walk-through, it was good to have a new set of eyes to help spot hazards that might have otherwise been overlooked,” said Darin Rehnelt, a representative for UFCW Local 1161.

The trainings last about six hours and are conducted in English and Spanish. Following the JBS plant trainings, the plan is to take the health and safety program to workers in the poultry industry, including those who work in JBS’s Pilgrim’s Pride plants.

If you are interested in having a health and safety training in your local plant contact Kurt Brandt at kbrandt@ufcw.org. Haven’t got a gift for dad yet? No worries! We’ve put together some great UFCW-made ideas for your Father’s Day shopping list!

When you buy union, you’re supporting the men and women who work hard every day to make and sell these quality goods. You’re also supporting good union jobs, that enable working parents to support their families with good pay and benefits. Unions are also on the forefront of legislative pushes for policies that benefit working families, like parental leave. Together, union families are working to make jobs work for all families.

After Serving Our Country in the Marines, Local 227 Member Continues to Serve in His Union This week, as Memorial Day approaches, we are honoring the memory of those who have fallen defending our country and its freedom. By spotlighting UFCW members who have served in our country’s military or who give their time to help those who have, we hope to continue the legacy of the heroes who have passed on.

Below is the story of Local 227 member Jeff Pleasant:

Jeff Pleasant always looked up to his uncle who was a marine. So, when he turned 16 he signed the papers to join and went to boot camp at 17 years old. Looking back on his 12 years of service to our country, Jeff explains, “The marines taught me to look after one another. Even though we always strived for success, it was important to reach back and pull someone else along too.”

After the marines Jeff had various law enforcement jobs where he had a union, but he never really got involved. Jeff became a member of UFCW 227 in 2006 when he went to work for JBS in Louisville, KY.

One day, frustrated with a co-worker, Jeff brought his complaint to the Chief Union Steward Kevin Diale. Jeff remembers Kevin explaining to him that as union members we look out for each other and if we have a problem we resolve it together. Jeff remembers, “That was the day I made the connection. The values that I learned in the marines were the same values of the labor movement. We’re always looking out for each other.”

After being a member for 4 years, Jeff decided he wanted to become a Steward because of his shared values with our union. He served as a Steward for 3 years before being elected by his fellow union member to become Assistant Chief Steward. A year later he was elected Chief Steward.

During his time as a Steward, Jeff got involved in his local union’s political program and signed hundreds of members up for the Active Ballot Club. He also traveled across the state of Kentucky supporting Wal-mart workers in their courageous fight to stand up for their rights. No matter what Jeff was doing he was always looking out for not just union members, but everyone around him in general.

Around 18 months ago, Jeff became a Union Representative for UFCW 227. Now, he uses the values the marines taught him to make our union strong, “For our union to be stronger we have to band together.” Local 1000 President Ricky Burris said, “Joshua Deases and Jason Muller were fired illegally last week. These two have been leaders in the organizing campaign at OK Foods to help maintenance workers get a voice at work. Both of them testified on behalf of the union in front of an NLRB Hearing Officer last year and served as official observers in the May 1st, 2014 election. The NLRB set the May 1st election aside because of repeated violations of the National Labor Relations Act and now OK Foods is again violating the Act by firing these workers. I strongly condemn these terminations.”

Maintenance worker Jason Muller said, “I’m not discouraged. The more they harass pro-union workers, the harder we will fight. OK Foods won’t intimidate us. OK Foods is persecuting Josh Deases and myself because of our union activities. This company, and specifically the CEO Trent Goins, should be ashamed.” With the help of the AFL-CIO and Union Plus, we’ve compiled a UFCW-made shopping list and some UFCW-made recipes so that you can enjoy whichever Spring holidays you celebrate–whether it be Easter, Passover, or just celebrating the nice weather, while supporting your union brothers and sisters at the same time!

If you’re looking for some sweet treats from the Easter bunny, all of the following candies are made by members of the UFCW family:

For Passover, the following UFCW-made items are just what you need: And for the chefs in the family, the following recipes are sure to make any family gathering a special one: Roasted Leg of Lamb with Rosemary via AllRecipes.com (WASHINGTON, D.C.) – Marc Perrone, International President of the United Food and Commercial Workers International Union (UFCW), today released the following statement in response to the merger of Kraft and Heinz:

“We have a profound responsibility to provide our hard-working families the opportunity for a better life. It is why we have a proud history of negotiating union contracts, with both Heinz and Kraft, that provides these incredible men and women better pay, benefits and job security. By working together we have not only met our responsibility to our people, but have proved that companies that choose to be responsible can be profitable and successful. We will continue to work with Heinz and Kraft to ensure they do what is right and responsible and that ‘streamlining’ and ‘cost-cutting’ measures don’t hurt the workers, their families, who have helped make these companies a success.”

WASHINGTON, D.C. — Kurt Brandt, UFCW’s Assistant to the Director of the Food Processing, Packing, and Manufacturing Division, has been appointed to the National Advisory Committee on Meat and Poultry Inspection (NACMPI). Kurt will be the only union representative on the advisory committee, making this well-deserved appointment welcome news for workers.

With over 30 years’ experience in the meatpacking industry, Kurt has performed everything from processing to manufacturing, developing both a knack and an appreciation for this tough but important work.

He has also been successful in bargaining contracts with the industry’s largest employers, consistently helping workers win wages and benefits that they can be proud of.

The NACMPI is tasked with advising the Secretary of Agriculture on matters affecting federal and state inspection program activities. As someone who has both worked in the meatpacking industry and fought to make it better, Kurt’s perspective will be an invaluable addition.